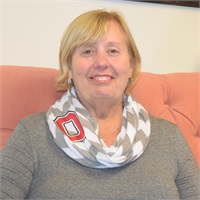 Deb began her first fulltime position at the Tice Agency the day after her high school graduation in June 1971. She held several different positions within the Tice Agency, eventually becoming Skip Hoovler’s administrative assistant. When Hoovler Financial & Insurance Services was formed she became the office manager handling various duties. She has been the jack of all trades, including customer service, processing, and balancing the books.

The year after starting with Tice, Deb married Herb Hutchison. They have been married for over 40 years. They have two children and eight Grandchildren.
Deb has volunteered with several groups in Central Ohio, most notably the Columbus Chapter of the Lupus Foundation. She organized several walks as well as other fundraisers for the chapter. She also volunteered for many years with Boy Scouts of America. This is coming full circle as she and Herb are both helping with Boy Scouts again with their grandchildren.

Although Deb still lives in Ohio, she also occupies the “Hoovler Financial South” office in Florida when she can (which isn’t nearly enough!) But most times, she can be found playing with her grandkids. They are often begging to stay with Nana! She also enjoys quilting, reading and watching the Buckeyes.